A giant statue of a cup of frozen yoghurt has been photographed alongside other oversized statues of desserts, such as the Éclair, the donut and the cupcake, in front of Google’s headquarters in Mountain View, California. This is a clear indication the launch of the latest version of its mobile phone operating system is imminent. 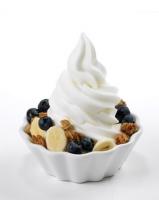 The operating system will have fully integrated Adobe Flash support, and there will be a massive improvement in speed, with unverified benchmark tests reported by the AndroidPolice website showing a 450% increase in speed over Android 2.1 (Éclair).

According to TechCrunch’s Michael Arrington, the new version will enable Android phone owners to use their phone as a portable Wi-Fi hotspot, and it will also have USB tethering built-in, which will allow the phone to be used as a modem to share its Internet connection with laptops and other portable devices such as gaming consoles. It is unclear at present if the Wi-Fi hotspot and USB tethering features could be disabled by carriers or allowed only for an extra charge. (AT&T still has not enabled iPhone tethering.) It is also unclear which phones will run the new version. Google has not yet confirmed any details about Froyo except Flash integration, but industry analysts are confident features such as FM radio, enhancements of OpenGL ES 2.0, color trackball notifications and additional free RAM will be included. Froyo is also expected to allow Android phone users to automatically upgrade applications and to install applications on an SD card, which would allow them to install more applications than they could using only the phone’s small built-in memory. Froyo is expected to be launched officially at next week’s Google I/O developer conference in San Francisco.