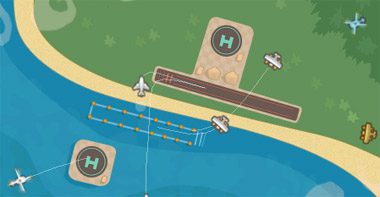 Flight Control is probably the single most successful iPhone game, and has been downloaded 1.5 million times. Best of all — at least for Firemint, the company behind the title — this is the number of paid downloads (the game costs 99 cents).

The game was released back in the March of this year and has hit 1 million sales mark in the second half of June. It’s the beginning of September and that number climbed to 1.5 million, which is super impressive.

Firemint’s CEO Robert Murray is delighted (who wouldn’t be) that they’ve reached the milestone, adding: “I’m just so incredibly grateful to all the many people around the world who have embraced Flight Control and helped us to reach this amazing milestone. There’s still a lot more Flight Control to come!”

We’ll see how that goes, but considering their experience, we’ve no doubts they know what they’re doing.

For the record, Flight Control gained multi-player capability in July, a feature that certainly helped add more customers on board.